Food additives are substances that are purposefully added to foods for technical, sensory, and nutritional reasons, such as to extend shelf life, or to sweeten and stabilize them. According to Euromonitor, about 47% of global consumers prefer natural products, and 55% of respondents look for natural characteristics when buying products. In the world, the current food trend is moving away from processed food to more natural foods with fewer additives and natural flavors. EU countries like France also make it their political agenda to produce and consume more natural foods with fewer additives.

From past developments, we can also predict that other countries in the EU may follow suit with such kinds of rules and regulations. The latest example is E171. In 2020, Titanium dioxide was banned as a food additive in France. The ban came after the country's health and safety agency stated that there wasn't enough evidence to guarantee the substance's safety. The decision was made because France had ordered a review of the substance in 2017 after a study found negative health effects on animals that consumed it. E171 has been used mainly as a white colorant in many processed foods such as candy, baked goods, and chewing gum.

Since 2017 Non-governmental organizations (NGOs) such as Foodwatch and BEUC have been trying to help extend the French ban to the entire European Union. Based on a proposal from the European Commission, EU member states finally agreed to ban E171 in all foods from October 8, 2021. They based their decision on scientific studies, which showed that titanium dioxide could damage the intestinal flora and cause cancer due to its nanoparticles. From February 7, 2022, to August 7, 2022, the implementation process of the ban on titanium dioxide (E171) will take place in the EU 2 years after France banned the additive. 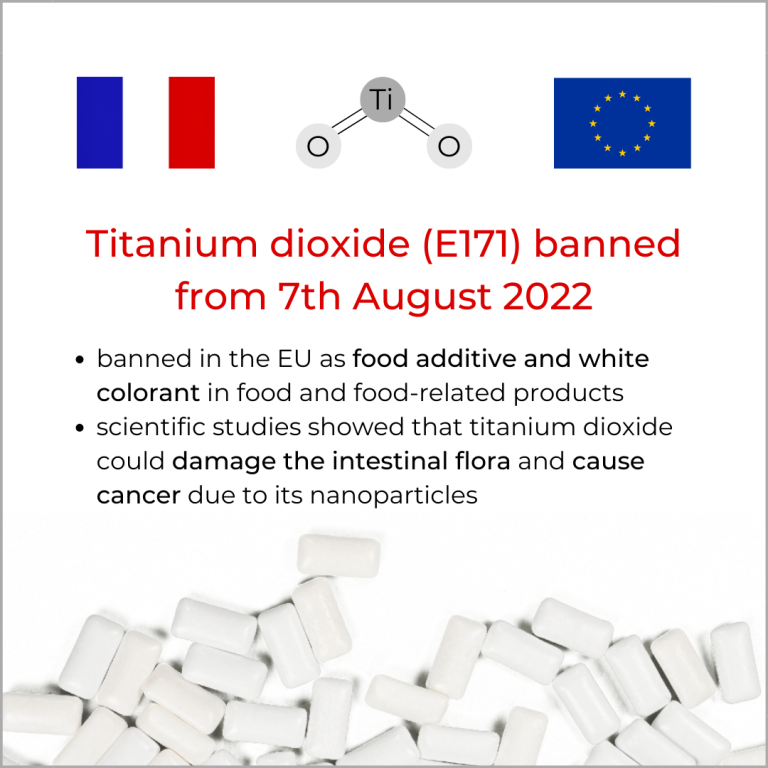 The regulation also provides for a review of the need to maintain or remove titanium dioxide (E171) from the EU list of food additives for exclusive use as a colorant in medicinal products or as a general whitening in food products.
Furthermore, in November 2021, the European Commission published a regulation removing E171 from animal feed. The additive must be removed from the market by March 20, 2022, and feed materials produced with the additive must be removed by June 20, 2022. This means that there will be a growing market need for titanium dioxide alternatives. The alternatives in today’s market are not approved for a wide range of applications, and their stability varies from product to product. Substitutes, such as rice starch, bind moisture and prevent effective drying, which negatively affects the surface of the product. A good alternative is calcium carbonate, which is a naturally occurring, bright white mineral. However, its particle size is much larger than that of titanium dioxide, and its chemical structure makes it less reflective.

Although it is not as effective as titanium dioxide as a whitening agent, it is an effective option for applications such as white coatings on confectionery and as an opacifier in sauces and soups. Although none of these options are exactly the same as titanium dioxide, in most cases they can be used as substitutes and alternatives to achieve a similar result.


France's outlook on chemical food additives
In France, the current food market situation heads toward more natural foods and fewer chemical food additives in processed foods. As a result, traditional chemical preservatives are being challenged by natural alternatives such as rosemary extract or sorbic acid.
France's outlook on this topic could also spill over to the rest of Europe as it happened with E171. It is not far-fetched to assume that all over Europe traditional chemical preservatives will be challenged by natural alternatives.


Health awareness trend
As governments and consumers all over the world become more health-conscious and demand fewer chemical food additives. We believe that the following food additives may be banned in the future:

Some studies suggest that phosphate may increase mortality rates for the general population, as well as for individuals with kidney disease and cardiovascular disease. Researchers have linked high phosphate levels to accelerated aging and vascular damage. 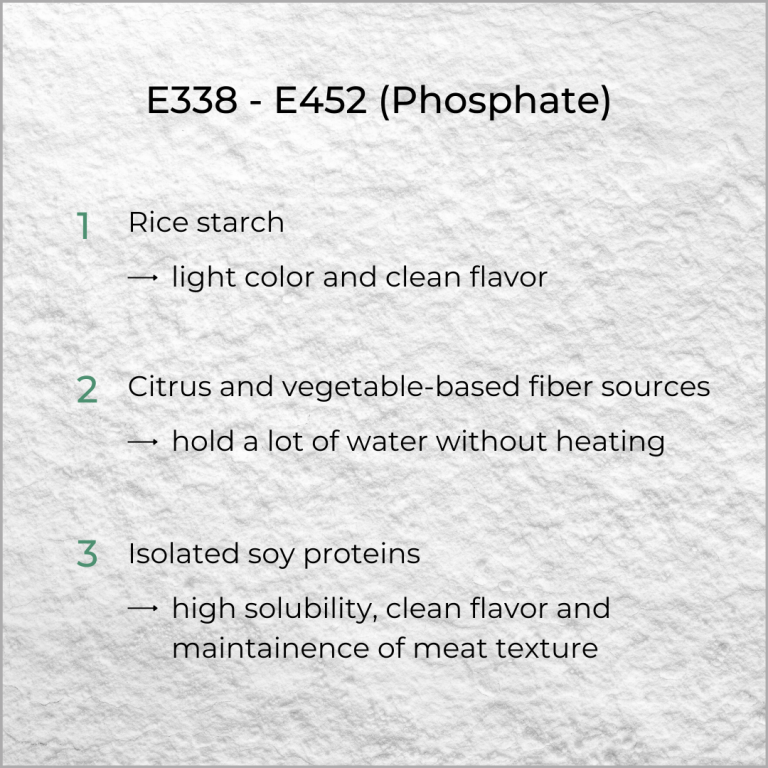 Monosodium glutamate is used as an additive to enhance flavor and taste. Despite research proving that MSG is not harmful and that it causes no significant or long-term harm, some consumers still avoid it and believe that it causes headaches, flushing, sweating, numbness, chest pain, and nausea.

Alternatives include salt, oil, cheese, and mushrooms, as they produce a similar taste, have a good reputation, and are well received by consumers.

The world's most widely used artificial sweetener, aspartame, has been linked to serious health problems, including cancer, cardiovascular disease, Alzheimer's disease, seizures, strokes, and dementia, as well as negative effects such as intestinal dysbiosis, mood disorders, and headaches.

Some alternatives are Stevia, Erythritol, Monk fruit sweetener, Xylitol, and Yacon Syrup. These substitutes aren’t linked to many health problems and therefore have a better reputation.


Nitrate ban in sausages
As recommended by the French parliament in one of its reports, nitrates in sausages should be phased out by 2025. This is to prevent an increased risk of cancer from the consumption of this controversial additive. Nitrates are used to extend shelf life and prevent the oxidation of sausages. In addition to being an antioxidant and antimicrobial, nitrite has significant benefits for food safety, such as preventing the growth of clostridium botulinum, which causes botulism, one of the deadliest foodborne diseases. They are considered preservatives because their antimicrobial properties also fight spoilage bacteria, so cured meat has a longer shelf life than fresh meat. More and more consumers demand nitrite-free meat products due to the concerns of health risk. Here are some general recommendations for natural preservatives:
Kakadu plums

100 grams of Kakadu plums can contain between 1,000 and 5,300 mg of vitamin C; that's about 100 times more than blueberries and oranges. As a result, consumers are benefiting from both the antioxidative and preservative effects of such healthy fruits.
Rosemary plant extract

Research has demonstrated that plant extracts, such as rosemary, can act as free radical scavengers and prevent oil and fats from going rancid. In 2010, rosemary extracts received final EU approval for food preservation.
Moringa olifeira

Moringa oleifera is known for its medicinal benefits. Recent studies have explored the potential of this plant's extract as a food preservative. Due to the biologically active ingredients derived from the plant, there is an improvement in the nutritional and organoleptic attributes of various livestock foods.
Parabens

Parabens are sometimes used as preservatives in cosmetics, pharmaceuticals, beverages, and foods. They have been used in the food industry for more than 50 years as preservatives and antimicrobials. Parabens are derived from 4-hydroxybenzoic acid (PHBA), which occurs naturally in many fruits and vegetables such as cucumbers, cherries, carrots, blueberries, and onions. As a result, it is the most widely distributed aromatic organic plant-based acid.

Verdad F32
The company Corbion Purac developed a replacement for sorbates and benzoates. The name is "Verdad F32" and it was presented at the 47th annual Frontiers in Education (FIE 2017), a major international conference focused on educational innovation and research in engineering and computer education.
Verdad F32 was presented as a potential antimicrobial agent that makes fresh foods, especially salads, last longer while naturally improving flavor. “Verdad F32” is an additive that is not genetically modified, not allergenic, and gluten-free. A mixture of beet and cane sugars, corn, and tapioca that undergoes a multi-step process of fermentation, crystallization, and filtration.


A health trend can be observed in the EU as well as internationally. In addition to foods that fill them up and taste good, consumers want foods that are healthy, enhance performance, and are not harmful. As you can see from the examples above, France seems to be a big leader of this trend in Europe. It is here to stay and grow. Therefore, this trend is likely to spread throughout Europe and eventually the world. Food producers and raw material suppliers should therefore keep an eye on social and political developments in order to react quickly when changes occur. As a general rule, natural food additives will be in greater demand in the future.


Let's simplify the future of change!

The topic of sustainability becomes more and more discussed among a variety of companies and consumers who are concerned about the well-being of the environment and self-wellbeing. With the recently increased activities of humanity, new challenges and problems arose. For example, shortage of farmland and water. The industrial growth made it more challenging for producers of natural raw materials (farmers) to produce and supply food ingredients due to increased consumption rates of food. As a result of increased food production, not all food is being consumed and food waste is created.

Since 03 July 2021, most single-use plastic products have been banned in the EU. This includes plastic straws, stir sticks, balloon sticks or disposable tableware made of conventional and bioplastic. To go cups and disposable containers made of styrofoam are also affected by the ban. The EU decision is intended to benefit the environment and protect the oceans. On the one hand, plastic products are often made from crude oil, a finite and fossil material mixture, and on the other hand, the resulting plastic waste is often not disposed of properly and thus ends up in the environment, where it hardly or only very slowly decomposes.