The topic of sustainability becomes more and more discussed among a variety of companies and consumers who are concerned about the well-being of the environment and self-wellbeing. With the recently increased activities of humanity, new challenges and problems arose. For example, shortage of farmland and water. The industrial growth made it more challenging for producers of natural raw materials (farmers) to produce and supply food ingredients due to increased consumption rates of food. As a result of increased food production, not all food is being consumed and food waste is created.
Moreover, human activities required to produce various consumer goods negatively contribute to the environment creating a CO2 footprint which in return “slowly” changes the climate. That makes such natural resources as clean water scarcer and more valuable. But what can be done about that? Where shall we start if we want to make a difference and contribute to a sustainable environment?
Then the subject of our attention must shift to one of the largest waste streams – Brewer’s Spent Grain (BSG).
What is BSG?
Brewer’s Spent Grain is a byproduct of the brewing beer process. Barley - the most common type of grain - plays a crucial role in this process since it travels through five steps of brewing, from malting to mashing, before it is deemed “spent”. When the process is complete, a brewer has a lot of wet-processed malt - that can be otherwise called BSG - consisting mainly of barley which had been processed and now cannot be used further in a new brewing process because all the useful elements (sugars and carbohydrates) needed for the brewing process had been extracted.

Why must it be upcycled?
As it was mentioned before BSG consists mainly of barley and is a byproduct achieved through the process of brewing beer. As a byproduct, it is already “used” and is considered as a food waste that must be disposed of. Sounds pretty simple. But did you know that the overall amount of the Brewers Spent Grain is equivalent to 64 container ships and accounts for 85% of byproducts from brewing activities?
But such an amount of food waste must be somehow processed. Most of it is used in industrial biotechnology, agricultural, and human consumption sectors. For example, BSG is mainly used in the agricultural sector as food for cattle and fertilizer.
Nevertheless, such malt can be called a valuable raw material that contains such nutrients as cellulose, proteins, and lipids. But the whole potential of BSG remains hidden as it is not used that often in the commercial food sector due to the novelty of the idea and technology. The potential of BSG is that it can be a valuable and natural food supplement that contains many nutrients and can be used in food.

Can you use BSG as a food supplement?
To provide a glimpse of how BSG can be successfully used in food production in the future, we already have enthusiasts who implemented this idea into reality and provided products made of processed grain. For example, processed grain can be used as a supplement to food or even as a food ingredient itself. Such upcycled product provides a source of proteins, fibers, nutrients, and other elements that are present in daily consumed foods.
For example, everyone loves cookies. But did you know that you can add BSG to make it more nutritious? Heated and grinded, spent grain is transformed into flour which contains more proteins, lysine, and fibers than regular flour. The same method is used to make ready-to-eat snacks that contain fewer fats due to the use of BSG from which it is made. 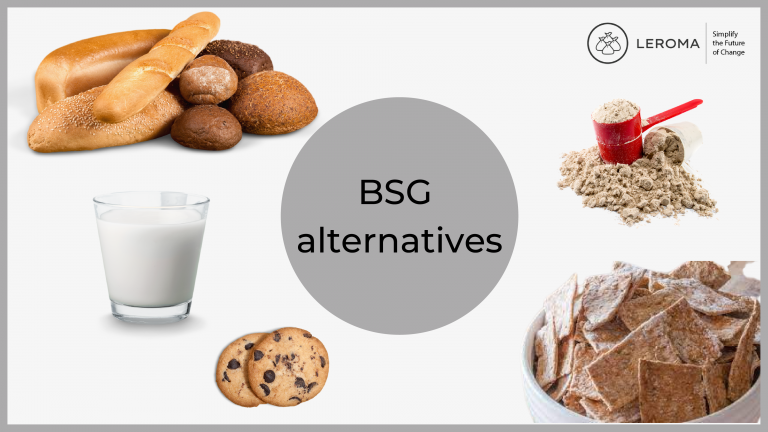 As a result, food products - mixes (used for bakery), chips and crackers, barley milk, and even meat replacers – are being made from BSG. However, making ready-for-consumption products is only a beginning as many companies think about how they can contribute to sustainability and encourage others to upcycle the processed barley.
Process and preserve.
Tetra Pak, a food processing and packaging company, suggests a patented solution that could solve current challenges with the distribution of BSG as a raw material and preservation problems, as it is a material that has an extremely short life span.
Therefore, could you imagine that BSG can be liquified again? Liquifying BSG would allow to pump it from one factory to another creating a “stream” and providing the solution for transportation without the need to use traditional transportation methods (such as trucks and ships). This would make it much easier to transport BSG directly to the processing factory, for example.
Moreover, the process of liquifying would also preserve the heat produced during the whole pumping process. Afterward, that heat can be collected and reused in other production processes. The heat also eliminates microorganisms and spores which can be unhealthy for human consumption, providing now a safe supplement that can be used in food.

Thus, Tetra Pak, as well as other companies who decide to use this method of processing, will save money and energy which in turn, contributes to the environment's sustainability.
But transportation by liquefication is only one side of a potential sustainability benefit. The other positive side is that after transportation, BSG can be dewatered to make it ready for further transportation (if necessary). Additionally, it preserves the BSG allowing it to last longer.
Potential solutions are also provided from the side of producers of raw materials in order to reassure others that their products will not lose in value due to upcycling. For instance, to reassure other manufacturers of barley that the reusability of BSG will not cause loss of value to producers of raw materials (farmers), extra pricing for barley will be offered to keep in mind the reusability of products. Thus, barley will become more expensive but this will only serve as a benefit and reassurance for barley producers.
What next?
In conclusion, it is fair to say that upcycling food waste becomes a topic of interest among many individuals who suggest and provide their ideas. Companies of food and beverage industries – small to large – provide ready products that have been made with the help of upcycling, therefore contributing to circular economy trends. Furthermore, consumers started to express a positive preference for food products made out of upcycled ingredients. Right now, we already have examples of successful implementation of BSG in various foods and ideas on how those processes can be made more transparent, convenient, and efficient in the food sector.

Therefore, similar upcycling methods can be used with other value streams to reduce and eventually eliminate food waste by transforming them into value streams. It is time to stop treating food waste as a “waste”, and encourage our mindset to consider it as a source of nutrients that can be reused. And thus, collective contribution to upcycling, starting with BSG, will encourage other companies and consumers to eliminate food waste together.

Food additives are substances that are purposefully added to foods for technical, sensory, and nutritional reasons, such as to extend shelf life, or to sweeten and stabilize them. According to Euromonitor, about 47% of global consumers prefer natural products, and 55% of respondents look for natural characteristics when buying products. In the world, the current food trend is moving away from processed food to more natural foods with fewer additives and natural flavors. EU countries like France also make it their political agenda to produce and consume more natural foods with fewer additives.

Since 03 July 2021, most single-use plastic products have been banned in the EU. This includes plastic straws, stir sticks, balloon sticks or disposable tableware made of conventional and bioplastic. To go cups and disposable containers made of styrofoam are also affected by the ban. The EU decision is intended to benefit the environment and protect the oceans. On the one hand, plastic products are often made from crude oil, a finite and fossil material mixture, and on the other hand, the resulting plastic waste is often not disposed of properly and thus ends up in the environment, where it hardly or only very slowly decomposes.