The economy is in a constant state of change, with new trends constantly emerging across all industries. It's no surprise that innovative developments will continue to demand our attention in 2021. At LEROMA, we want to keep you up to date, so this week we've been looking at a trend that has particularly caught our attention:

Especially in view of the growing population, we are always looking for new sources of raw materials that can sustainably satisfy our needs. More than one eye in the search turned to algae, which has long been firmly integrated into everyday life in some parts of the world. Of the countless algae species, only a fraction is used industrially, so far mainly in the food industry.

Algae are multicellular marine plants that have at least one cell nucleus and thus belong to the eukaryotes. They perform photosynthesis and are classified as green, red and brown algae based on their coloration. Often, blue-green algae are also counted among the algae groups, but they are rather considered bacteria and are therefore also called cyanobacteria. Researchers estimate that there are more than 400,000 species of algae worldwide, ranging from the smallest microalgae, some of which we cannot even see with our blank eyes, to macroalgae, some of which grow to over 40 meters in length. Under favorable conditions, filamentous algae, for example, can grow between two and three meters in two weeks. This rapid growth, which most algae species have in common, makes marine plants a sustainable raw material that is available in inexhaustible quantities and has also been cultivated in professional algae farms for several years. 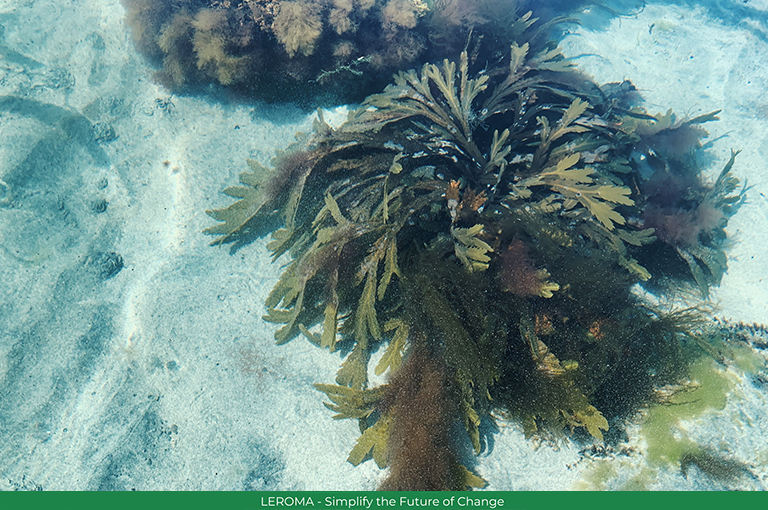 These now make up the majority of algae available on the market. Of the countless algae species, only a fraction is used industrially, so far mainly in the food industry.

Fried, boiled, steamed, dried, raw or pickled. In Asia, around nine million tons of macroalgae are consumed annually as a salad, vegetable, soup ingredient, ingredient for sushi, tea, spice or snack. In Japan alone, algae account for up to 20% of daily consumption, which is why the raw material occupies a significant position in the economy there. Outside of Asia, seaweed is usually only available dried and is mainly used in the preparation of sushi. For many years they were underestimated by much of the world, but now many companies and food technologists are discovering the variety of healthy and valuable ingredients, which is why the use of the marine plant is increasing sharply and it is nominated as the superfood of 2021. 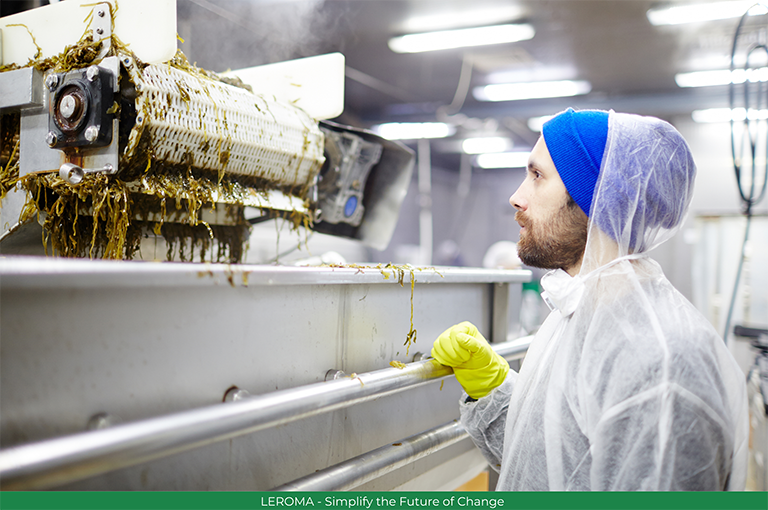 Unlike land plants, which absorb nutrients and water with roots, algae use their entire surface area to absorb minerals and trace elements from seawater. They can store these in very high concentrations, which means that algae have the highest nutrient density of all plants. They are rich in minerals (magnesium, calcium and potassium), trace elements (iron, zinc and selenium), vitamins, carbohydrates, proteins, amino acids and unsaturated fatty acids. They also contain antioxidants, omega-3 fatty acids, which are important for metabolism and have an anti-inflammatory effect, and niacin, which can, for example, lower cholesterol and blood sugar levels and protect and regenerate body cells. The cell renewing properties have a strengthening effect on the skin, hair and connective tissue and even support our immune system. In addition, some types of algae contain more vitamin C than citrus fruits. Especially for vegans, algae are an alternative source of essential amino acids, calcium and omega-3 fatty acids.

In addition, algae especially have a very high iodine content and contain potassium chloride. This composition makes them a suitable substitute for table salt, which is why algae can contribute to a significant reduction in our salt consumption, which on average is above the recommended levels.

In general, seaweed is soft and tough, the leaves are soaked and rinsed, and then further processed. It is difficult to generalize about the countless types of seaweed beyond this, as their properties vary greatly depending on the species. For example, the taste ranges from mild and bland to spicy-salty and intense. To provide some insight, we would like to briefly introduce the most popular edible seaweed species:

Nori is leafy red seaweed, often sold as dried, papery sheets, used primarily to make sushi rolls, but also simply nibbled as a snack in Asia. With a protein content of up to 50%, nori is highly nutritious, but contains little sodium as most of this is washed out during processing. The algae tastes mild and slightly nutty. It does not need to be cooked and is sold roasted, unroasted or as flakes. 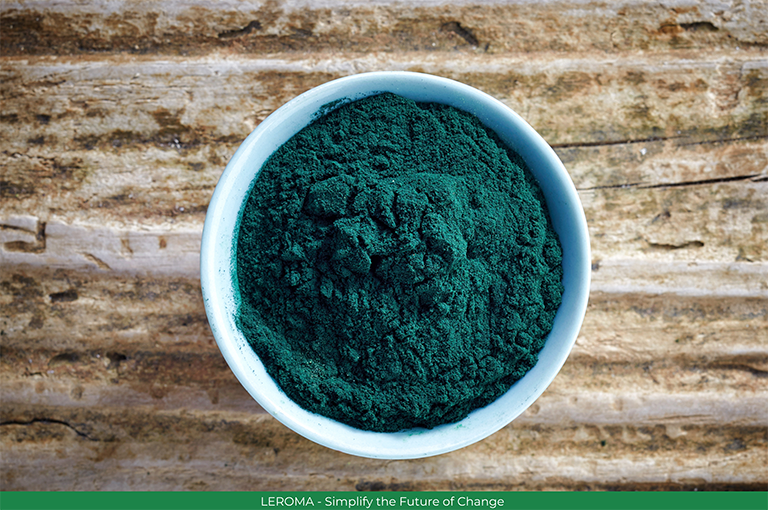 Wakame are brown algae with a crunchy consistency, often used as an ingredient in salads or soups, to which they add a strong flavor. They are particularly rich in iodine and therefore taste salty. Wakame is often boiled, finely chopped and served with a little sesame oil as a vegetable garnish to sushi and is also frozen and sold in the form. 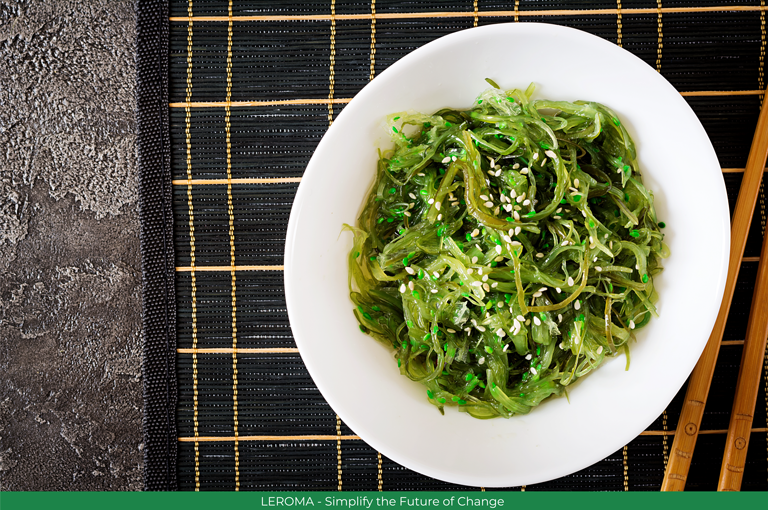 Meanwhile, more and more entrepreneurs around the world are becoming aware of the versatility of the raw material and start-ups are emerging that focus on algae.

For example, algae milk is already being produced from the marine plant, an innovative and plant-based alternative to dairy products with a high protein content, creamy texture and mild flavor. A French start-up founded last year uses oil extracted from algae in combination with fava beans, natural flavors and emulsifiers for this purpose. Thanks to its many valuable ingredients, the algae drink has a nutrient-rich profile, contains no allergens and 24% more magnesium than cow's milk.

In addition, startups are already developing chicken substitutes from spirulina algae, jackfruit and chickpeas, and plant-based fish substitutes are also in the works.

Algae are also used in a variety of ways outside the food industry. In the following, we focus on these different areas of application:

As early as the 1960s, algae were investigated for an anti-cancer effect, as it was noticed that the breast cancer rate in Japan was comparatively low. Today, around 70 substances can be produced from algae that selectively kill cancer cells. In particular, fucoidane, a sulfated polysaccharide that occurs naturally in algae and in some marine animals such as sea snails, sea cucumbers and sea urchins, is being clinically tested because of its anti-cancer properties.

Furthermore, algae can compensate for iodine deficiency. Iodine is essential for growth processes, the development of the nervous system and necessary for the formation of thyroid hormones, which regulate metabolism and the cardiovascular system. In Germany alone, around 30 million people suffer from thyroid dysfunction because they do not take in enough iodine through their diet. This can lead to weight fluctuations, because the thyroid gland can no longer produce enough hormones and as a result the metabolism slows down. Algae have a naturally high iodine content and even the smallest amounts of the particularly iodine-rich algae species such as kombu or wakame can cover our daily requirement. 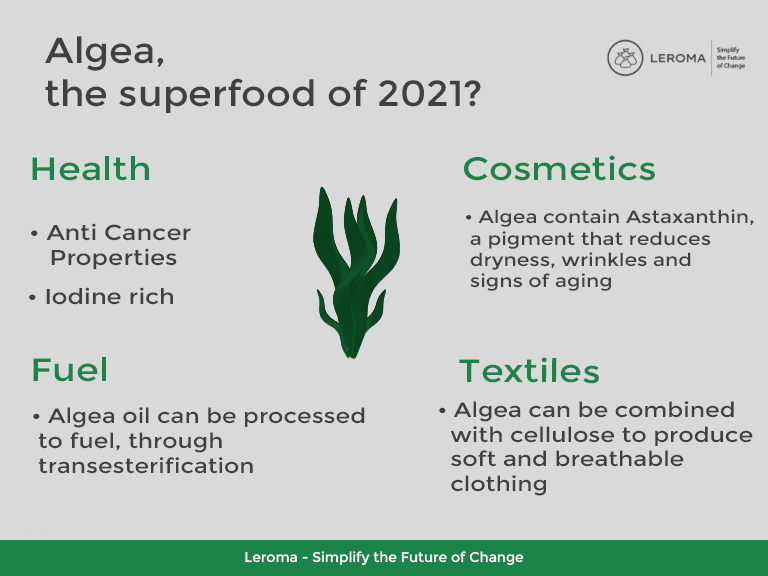 However, the superfood should be used in moderation, as an excess of iodine can also promote the development of diseases and is particularly noticeable in autoimmune diseases, in which our body forms defensive substances against parts of the thyroid gland. Besides algae, only marine animals have a naturally high iodine content.

Algae are particularly interesting for skin care products because of the astaxanthin they contain, a reddish pigment produced mainly by green algae. Astaxanthin can fight more forms of free radicals than other antioxidants and the molecules can penetrate all skin layers and cell membranes due to their high fat and water solubility. The pigment reduces pigmentation spots, dryness and wrinkles of the skin or prevents signs of aging from forming, which is why algae are popular in skin care and anti-aging products. Algae extracts strengthen the skin's natural defenses, have an anti-inflammatory effect and the proteins they contain store moisture in the skin and promote its regeneration. 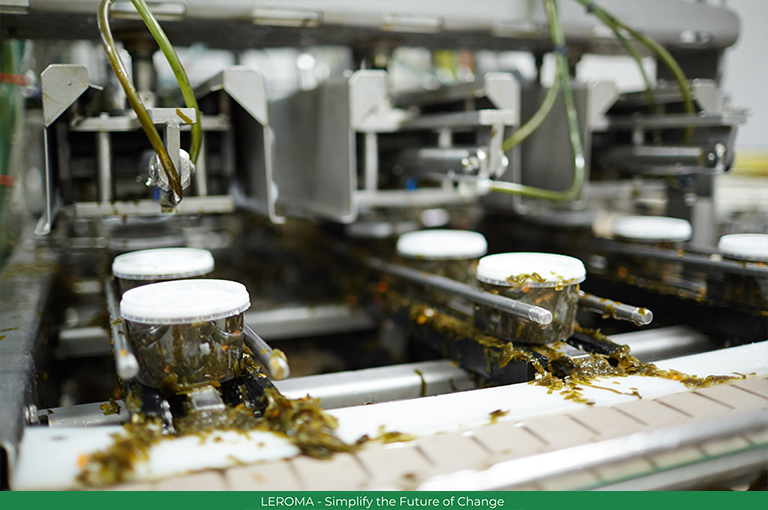 Algae can be processed into various biofuels that provide an alternative to fuels made from corn or sugar cane:

• Carbohydrates contained in algae can be converted to ethanol by alcoholic fermentation.

• When the algae mass is fermented to methane and carbon dioxide, gas is produced.

• When there is a shortage of sulfur, algae stop producing oxygen and instead produce excess energy, including hydrogen.

The advantage of algae over corn and sugar cane is that they require less cultivation area, as their yield per area is significantly higher, mainly due to their rapid growth.

However, the production of algae fuels is not yet worthwhile on an economic level, as production costs are significantly higher than for other biofuels. Production processes will have to be further developed in the future in order to be able to integrate the innovative fuel into our everyday lives. One solution could be the Enomoto algae, an improved cultivation of Botryococcus that reproduces much faster than conventional algae species.

Algae can be combined with cellulose for example to produce fibers that can be further processed into soft and breathable clothing.

Even in the form of textiles, algae are said to have positive health properties. Natural skin moisture is released when worn, and the fibers are also well tolerated by allergy sufferers. But above all, garments made from algae are a zero-waste product. A British company's algae T-shirts, for example, can completely decompose themselves in just 12 weeks when buried in soil.

In addition, algae textiles use fewer resources than conventional textiles.

At this point, it is probably clear to you that algae offer many more possible use cases today and in the future than we can enumerate.

With this article, we have given you an insight into the inexhaustible raw material from the sea. Algae make it clear that we don't always have to discover something completely new to drive innovation. Sometimes it is enough to turn our gaze to previously underestimated raw materials and unleash their full potential. We at LEROMA will continue to keep our eyes open and report to you about innovative raw materials and trends in the food industry.

Let’s simplify the future of change!