A good feeling goes hand in hand with a healthy body. We regularly exercise to stay fit or try to move more, but more and more consumers feel that, above all, a healthy and balanced diet is essential for their physical well-being. The health trend is evident in the food industry not only in the demand for healthy and natural snacks, but also in numerous other nutritional trends, some of which we would like to share with you this week that have particularly caught our eye.

Soft health refers to a trend that focuses not on avoiding foods perceived as unhealthy, but on eating a balanced and varied diet. Instead of always paying attention to the fat or calorie content of foods, consumers are striving for a diverse and balanced diet that includes, above all, more fruits, vegetables, legumes and grain products. This automatically reduces meat consumption.

Consumers can therefore not only eat healthily, but also enjoy it, because instead of abstaining, they set positive impulses with more healthy foods in their menu. Conscious enjoyment.

The turn to plant-based foods can also be subordinated to the health trend, because fruits, vegetables and co contain many important nutrients, vitamins and minerals that are important for our bodies and are not found in animal products. These include, for example, fiber, which aids our digestion, stimulates the metabolism and can lower high blood pressure, as well as antioxidants, which ward off harmful external influences by neutralizing "free radicals". Free radicals are created by harmful external influences such as UV radiation, drugs, nicotine or inflammation in the body caused by infections or injuries and damage molecules that are important for cell functions. Too many free radicals in the body lead to "oxidative stress," which contributes to cardiovascular disease or cancer, among other things. Antioxidants include primarily phytochemicals; color fragrances and flavorings found in vegetables, fruits, potatoes, legumes, nuts and whole grains.

A plant-based, vegetarian or vegan diet can therefore reduce diet-related diseases, since the ingredients preventively combat the causes and also support recovery.

Nowadays, one's dietary style is also considered part of one's lifestyle and reflects individual values. The turn to plant-based foods, in addition to the desire for physical health, is also driven by the desire for sustainability and animal welfare. So we can see from this trend in particular that, for many consumers, a healthy diet is inextricably linked to a conscious diet that places value on sustainability, regionality and the impact on the environment.

Clean eating is about consuming only "clean", unprocessed foods as much as possible and preparing them fresh yourself. Actually, the concept is not new, because the "whole food" diet has been around since the 1960s, but is gaining importance under the name Clean Eating in the wake of the health trend.
The nutritional concept is based primarily on fruits, vegetables, legumes, whole grains, and dairy products, but fish and meat are also allowed as long as they are fresh and prepared by the consumer. Consumers who eat according to this principle buy regional and seasonal products; fruit and vegetables should also not be contaminated with pesticides if possible. Above all, highly processed foods are avoided because they usually contain fewer nutrients than fresh foods. In addition to many snacks, convenience foods and desserts, these include sausages, preserved vegetables, fruit juices and milk drinks. These products are industrially manufactured from many different ingredients and contain additives such as sweeteners, colorings, flavor enhancers and thickeners. They must also not contain genetically modified plants, animals or microorganisms.

In principle, consumers want to consume natural foods, but the Clean Eating trend is not always understood in the same way. While some only buy organic products, others make sure to follow a low-carbohydrate diet or avoid dairy products, among other things. For some consumers, Clean Eating even stands for a vegan or lactovegetarian diet. Lacto-vegetarians consume mainly plant-based foods, milk, cheese and honey, as this usually allows them to absorb all the important nutrients.

Although there is no fixed definition for the term "superfood", it is usually used to describe plant-based foods that are said to have health-promoting properties. Avocados, chia seeds, the leaves and seeds of the quinoa plant and many other popular superfoods are characterized by their high nutrient content and antioxidant effects. 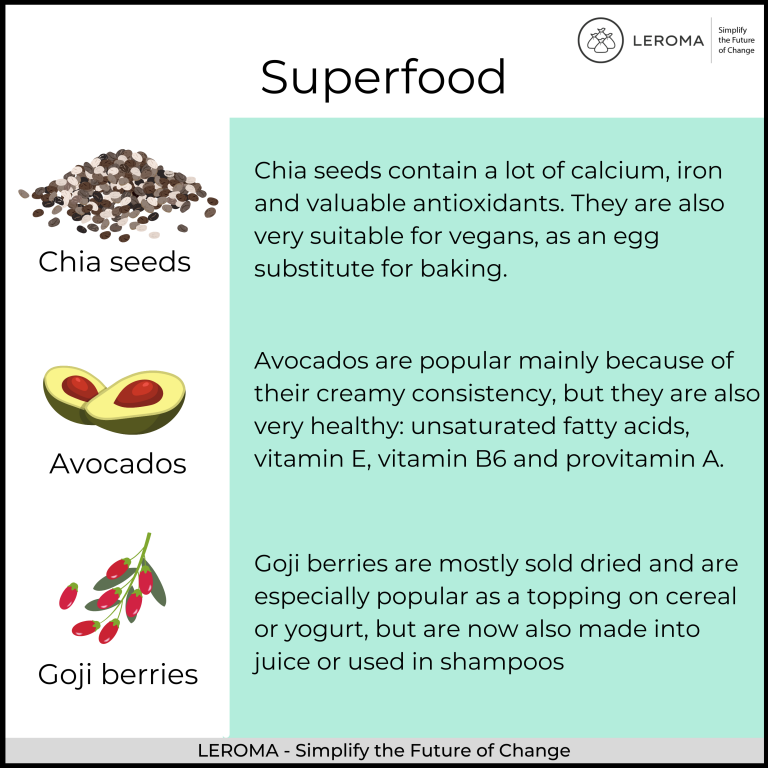 Chia seeds, for example, are considered a superfood because they are rich in fiber, protein and omega-3 fatty acids, which aid digestion and regulate blood sugar. They are also said to be able to relieve pain in the joints. The seeds are stirred by consumers into mueslis, smoothies, among other things. Meanwhile, there are also products such as pizza dough which consists of Chia seeds, in the market. The growing popularity of the superfood can also be seen in the fact that global sales of the seeds have increased from $0.27 billion in 2016 to $1.5 billion in 2021.

Although the term "superfood" has been used since the 20th century, it has only become widely known in recent years. The trend continues to grow, with new superfoods being added to supermarket shelves almost every year.

For example, algae, which are increasingly considered a food outside of Asia, have the highest nutrient density of all plants, and can compensate for iodine deficiency even in small amounts, are now also considered a superfood, as are insects, which are true protein bombs.

However, it is important to note that it is not enough to rely on individual superfoods as a healthy addition to your diet; the seeds and fruits should be part of a balanced diet.

It's nothing new that consumers want to avoid excessive consumption of sugar, as it can lead to obesity and diseases such as diabetes. Of course, the unhealthy sweetener doesn't fit in at all with the health-promoting diet that many consumers are striving for today. So it's no wonder that the industry is striving to reduce the sugar content of its products in order to advertise them and make them more attractive to buy.

More and more consumers want to consciously limit their consumption and are increasingly turning to alternative sweeteners such as maple syrup.


Influence of Covid-19
Most of the trends listed developed before the global pandemic, but were in some cases amplified by it. According to a study by the German Ministry of Food and Agriculture, 39% of 1,000 German citizens questioned said that the importance of agriculture has increased for them, 30% cook more often than before Corona, and more fresh ingredients are used.

Our food has always been important to us, but we see it taking on a greater role now and in the future in preventing disease, healing and maintaining a healthy body. It is important that companies recognize that these developments will have a lasting impact on the market and that the food industry is already inextricably linked to the healthcare sector. 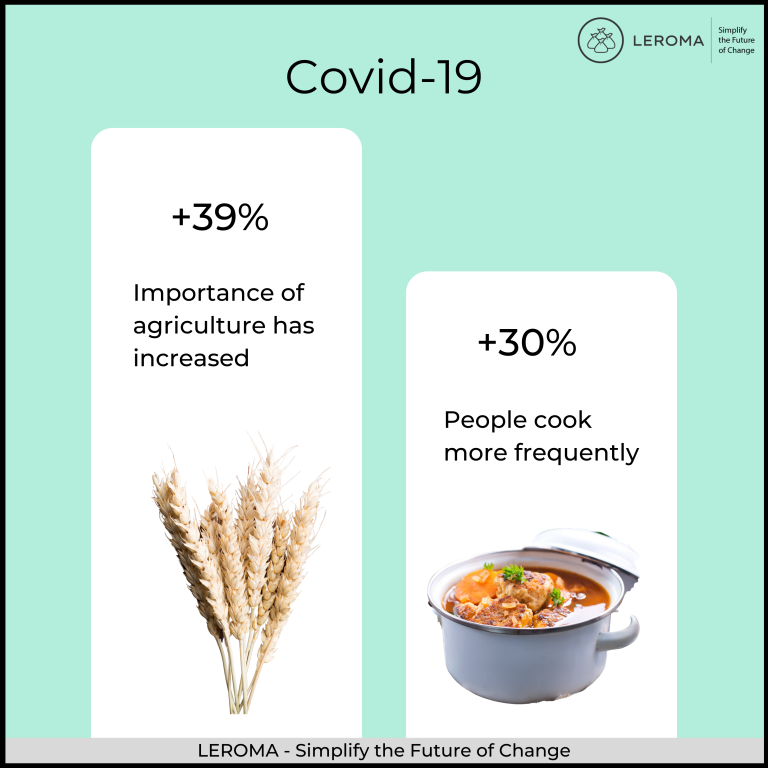 Alternative sweeteners - How healthy are dates, stevia and co?

Disaccharides are organic chemical compounds from the group of carbohydrates that have a sweet taste. Probably the best-known disaccharide is sucrose, a crystalline food known to most of us as household sugar and obtained mainly from sugar beet, sugar cane and sugar palm, which is why it is also called cane or beet sugar.

In our magazine, we have already introduced you to various residual materials that arise during food processing and offer a mostly undiscovered variety of applications. We started with our article on the possible uses of coffee grounds at the beginning of February, followed by walnut shells, eggshells, fish scraps and others. In this way, we want to continuously draw attention to the waste of valuable raw materials that can be passed on in the sense of a circular economy. For various industries, the use of residual materials represents a cheap and sustainable alternative to conventional, sometimes artificial materials, and also reduces the CO2 emissions and costs that would be incurred if they were disposed of.